The existing, epoxy quartz coatings in the boarding area of the Fort Hunt Animal Hospital had not held up well. Several areas were disbonding or were hollow (the coatings were sitting on the concrete but not bonded to the concrete).  The kennel manager contacted us in September, 2014 and requested we come take a look after finding us on the Internet.

Some investigation showed that the floor had not been properly prepared by the company who applied the original company. We found out through our onsite visit, this “professional” coatings company had basically ignored the customers request for assistance and warrantied repair.

We proposed a solution which involved removing the troubled areas and mechanically preparing the remaining coatings with our grinders (both walk-behind and hand held).  Instead of applying additional quartz coatings, we strongly suggested they move to a decorative, 1/8″ chip floor.  This would provide a more forgiving feel and also not look dirty so quickly.

In February (2015), the ownership determined they were ready to proceed with our suggested solutions.  Coatings proceeded over two days in the beginning of March.  The 1/8″ chip coatings were applied to all main floor areas and up the existing cove base & vertical surfaces of three platforms.

We quickly got word that the new, 400 square feet of epoxy coatings were a big hit with all of the staff. 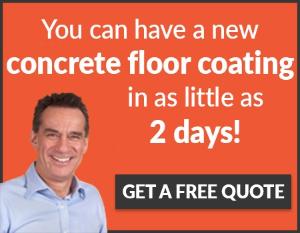